Executing a single query doesn’t always literally mean executing exactly ONE query. Sometimes PostgreSQL (like any other relation database) will have to extract parts of your query (subqueries) and re-execute it as many times as needed to generate the results you are expecting it to generate. This article shows how N+1 issues can also happen without an explicit intent to produce them.

Introduction to the problem

Computing aggregated columns is a common task, sometimes requiring the relational engine to go through more than one table: counting comments on blog posts, counting favorites on tweets, …

This task can be done in many ways, here are the first three that come to my mind:

While many developers now about the performance implications and issues of solution #1 (the N+1 queries it will generate — where N is the number of blog posts), it isn’t obvious what would be the difference between solution 2 and 3, especially when it comes to dealing with large datasets.

Let’s take those two implementations (the one based on JOINs and the one using a subquery), and analyze the difference1.

For that purpose, let’s use EXPLAIN ANALYZE on both of them. We will use the LIMIT clause and iteratively restrict the dataset to see the complexity trend: are we going to observe a logarithmic growth? linear growth? constant time?

The plan for that query is pretty straightforward:

Using JOIN makes use of HashAggregate, which is very efficient (and if both tables comes already sorted by the id/post_id columns, the planner will decide to use the GroupAggregate function and the query will be even more efficient).

This solution is pretty straightforward but having to use (and write) a combination of a LEFT OUTER JOIN and a GROUP BY clause can sometimes be scary for those unwilling to deal with any kind of SQL statements.

Some people will probably want to switch to using raw SQL (with ActiveRecord::Base.connection#execute) but this limitation is inherent to using an ORM.

Now onto the subquery. The solution looks seducing at first sight: a query nested within another: no grouping, no joining, just a simple WHERE clause from the parent plan (not sure about the wording here).

The plan is now very different:

2.1. It is going to be executed a certain number of time: this is the loops value. We can read 71, which matches the exact number of posts from our posts table: this plan will be executed 71 times

2.2. Given a post’s id, a sequential scan will be executed on the comments table

2.3. Once all the comments matching the post’s id have been retrieved, the result set is aggregated using the Aggregate function

What the planner unveiled was a N+1 type of issue: given N records in a posts table, we will have as many subplans (or subqueries) as post records.

Using ActiveRecord will require developers to write some SQL, here are two ways of achieving the same result:

Not really readable, the implicit (and hidden to the unwary) N+1 issue of that strategy makes its inefficient and potentially harmful.

Let’s now test the performance of those queries on the same dataset. We’ll gradually increment the number of records to consider to observe the execution time growth. 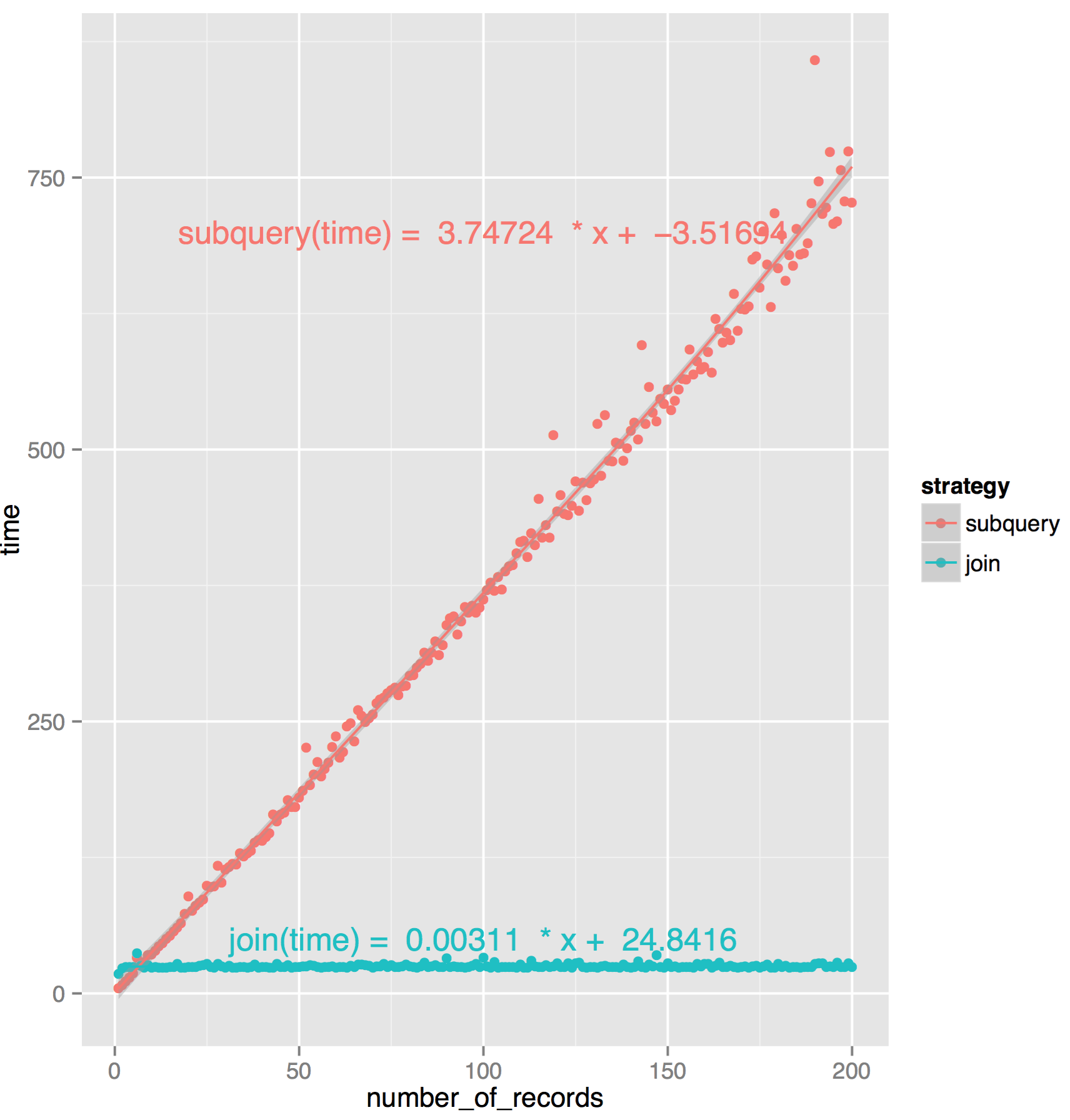 Applying a simple linear regression on the datasets, here are the two formulas that defines our two strategies’ performances:

Most developers working with ORMs are aware of the limitations of their tools and how to avoid N+1 in their code (using eager-loading strategies for example). But N+1 doesn’t only mean “sending N+1 statements to the database”, sometimes this single statement can turn into an unbelievably time-consuming statement with thousands of subplans (subqueries).

Active Record has an #explain method that can help developers understanding the generate SQL.

As an exercise to the reader, I’d suggest comparing query plans when the number of posts and the number of comments differ. For example, here’s the query plan for 50k posts, and only 5k comments:

As you can see, not only it will use the unique index on the posts table, but also use a GroupAggregate given the comments are being sorted in memory. Also, the planner can decide to build totally different plans based on the statistics it’s computed on the database, so please analyze frequently.

1: *A GitHub’s repository is available with the source code so that the results are reproducible. Please feel free to contact me if some of the numbers don’t feel right, I will keep the repository updated**.